A GUIDE TO UNDERSTANDING ROSACEA 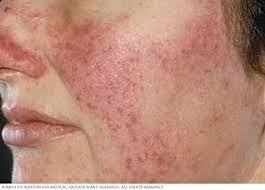 Rosacea is not a complexion problem that will go away by itself if it is not treated, it will only get worse. It can cause devastating psychological and social problems in addition to its physical effects.

Researchers believe that hereditary as well as environmental factors are to blame.

If the first lines of defence in the skin are down, everything that follows will start to deteriorate. The lymphatic system as well as the vascular system and the immune responses, the Langerhans cell, keratinocyte must all work in synergy. Whenever one of these is compromised the skins barrier defence systems are breaking down and consequently vascular disorders or reactive rosacea forms.

The wet oily look that the skin often has is not due to oil, but fast trans-epidermal water loss, when the acid mantle and ceramides are non-existent the skin looses its vital water, this again exacerbates the inflammation which is a major player in rosacea.

By understanding the need for balance and harmony underneath the skin and how important it to have a good immune system we can conclude that essential fatty acid deficiency or an impaired acid mantle would be two major contributors to Rosacea.

A mite that lives in hair follicles is believed to clog oil glands and get into the capillaries network leading to inflammation & rosacea.

A bacterium that causes intestinal infection is also believed to be a contributing factor to Rosacea.

Rosacea can affect all segments of the population, more so people with fair skin.

Asthma, eczema, psoriasis, dermatitis and rheumatoid arthritis can all be regarded as indicators to Rosacea.

Rosacea can be flared up by a variety of triggers ranging from sun exposure, stress, alcohol, spicy foods and hot beverages such as coffee. Medications and cosmetics with irritating ingredients and fragrances can also lead to an outbreak of Rosacea.

WHAT NOT TO DO
Rubbing & harsh scrubs
Steam rooms, saunas
Irritating cosmetics
Eat too much dairy